The top 10 best beaches in Britain 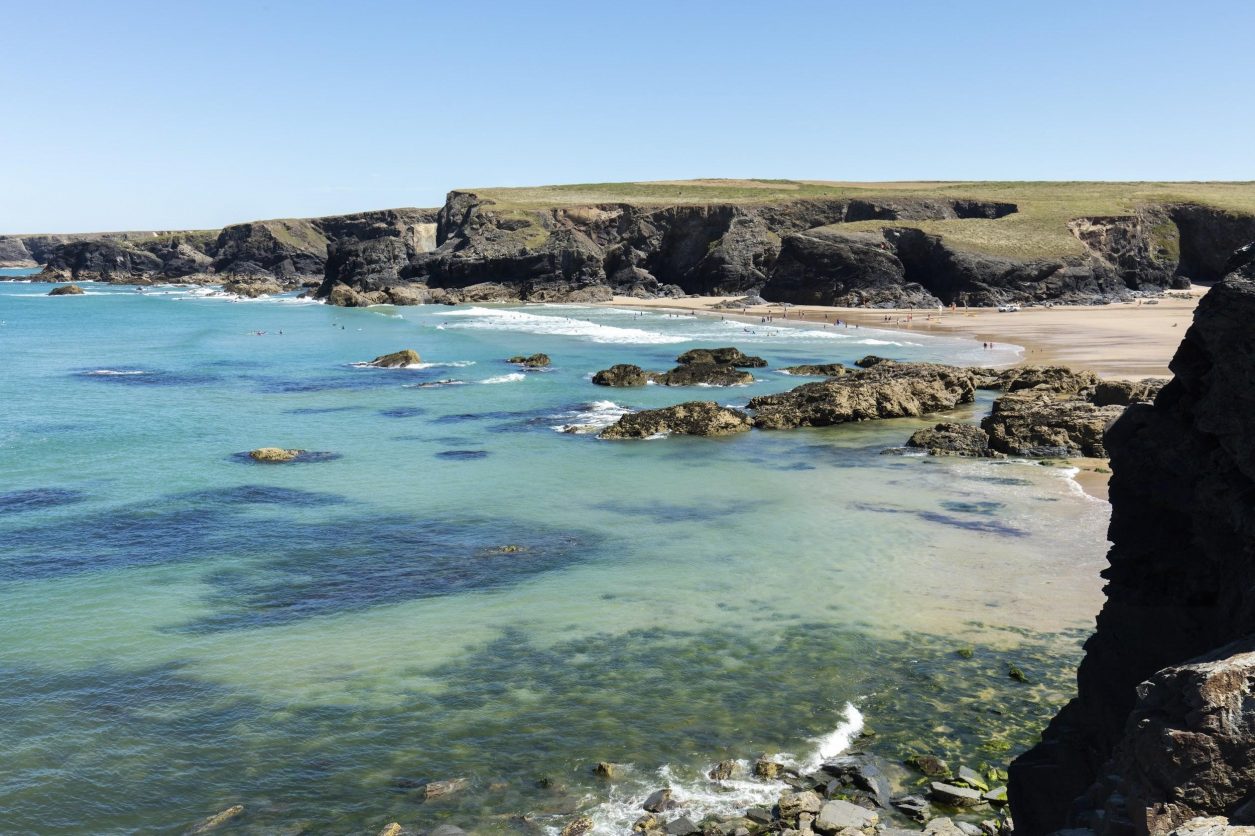 If getting on a plane is your idea of hell right now, you’re not alone.

So to save some time, we’ve checked out the top 10 best beaches in Britain along with our friends from Holidu, the search engine for holiday rentals, so you can enjoy a staycation instead!

Over  550,000 Google Reviews for over 650 beaches in the UK have been analysed and here you have it – presenting the ultimate ranking of the top 10 most breathtaking British beaches to visit this summer! 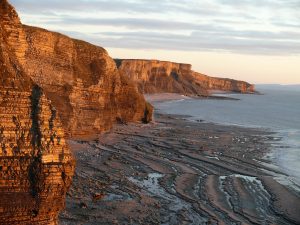 Coming out on top of this ranking is Traeth Mwnt beach, located in Carmarthenshire, Wales.

The cove is owned by the National Trust and remains largely unspoiled by tourists, despite being a popular off-the-beaten-path spot. There are plenty of routes to walk along the cliffs which enclose the beach, including The Ceredigion Heritage Coastal Path.

The route leads you around Foel y Mwnt, taking you to the hilltop on which you can overlook the beach.

If you’re a lover of wildlife and nature, position yourself on the headland at the beach and you might be lucky enough to catch a sight of dolphins, basking sharks and porpoises! 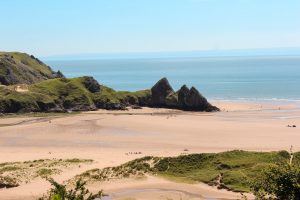 In second place is another beach which can be found in Carmarthenshire, Wales. Three Cliffs Bay beach offers a wilder experience – picture a spectacular shoreline of sand dunes, salt marsh and limestone cliffs.

The beach is an important asset for locals and visitors and routinely qualifies for Blue Flag status. Fun fact: this beach actually appears in a music video of the world-famous band Red Hot Chilli Peppers!

Dogs are also allowed to enjoy Three Cliffs and the sand is often frequented by horses and their riders galloping along the beach. 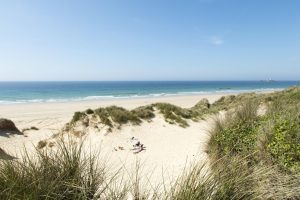 Clinching the third spot on the podium is the first of three beaches in Cornwall. Upton Towans beach, also known as Hayle Towans, is a magnificent coast which could rival those found in the Caribbean with its white sand and turquoise blue sea contrast.

This is a popular surfing destination and also the perfect place to take your children, as they can have fun for hours as they run through the sand dunes and explore the rock pools.

You can even bring your dog and jog along the three-mile stretch as you admire the magnificent view of the lighthouse.

Mellon Udrigle Beach is the northernmost beach in this ranking today, tucked away up on the northwest coast of Scotland. If it is a remote landscape with few visitors you’re looking for, this beach could well be the best one for you. If you are lucky enough to make the trip on a good weather day, you might even be able to see the island of Skye across the waters.

The beach is the regular resting spot of seals who place themselves on the rocks and the location in general boasts unrivalled views of the mountains of the Scottish Highlands in the distance.

Porthcothan beach in Cornwall is another southern English beach which has scenery which rivals that of far away, exotic countries. It is dog-friendly, kept clean and tidy, has an ice-cream shop and cafe nearby and you are even allowed to have your own barbeque on the beach.

There is plenty to do here, from surfing to long, picturesque walks. If you’re new to surfing but fancy giving it a try, this is the perfect place to do so, as it is regularly patrolled by lifeguards during the summer and local surf schools often use the beach for classes.

Heading back to Wales, Caswell Bay is another irresistible beach which regularly achieves Blue Flag status and will be a hit with visitors of all ages. Children and dogs can run free along the sandy shoreline and surfers can take to the waves, with a popular surf school even offering lessons all year round.

Expect to find rock pools home to wildlife, clean water for swimming and kayaking and much more. There is a beachside shop which stocks all of the essentials required for a day spent on the sand. This beach is also easily accessible by car and public transport and has a lifeguard on duty every day of the week during the summer months.

Scotland is home to many islands (over 900 in fact), and these islands are home to some incredible beaches. Machir Bay overlooks the North Atlantic Ocean and is located on the west coast of the Isle of Islay, situated in the Inner Hebrides, and its remote location means that it is more often than not deserted.

A trip to Islay would not be complete without paying a visit to this raw and epic stretch of sand. This beach is a stunning location to enjoy the sunset, and you might even be able to spot pods of dolphins leaping through the waves. Whilst you’re on the island would be worth your while to visit the nearby Kilchoman Distillery to get a true Scotch whisky experience!

Next up is a beach which is no stranger to being ranked among the best beaches in the UK, and even the world! Often dubbed a “surfers paradise”, Woolacombe is the perfect place to head if you want to catch some waves or sit back and watch from the comfort of the sand as the professionals do it. The surrounding landscapes belong to the National Trust and provide breathtaking scenery beyond the beach itself. This is the perfect place to go for some bodyboarding, surfing, or simply a day spent sunbathing. There are plenty of facilities on hand for your day trip, including three large car parking areas, a variety of food trucks, toilets with baby changing facilities. This beach is family owned and run, which is shown in the family-friendly focus in which it has.

Yet another beach in Cornwall making its way into the top 10, but for very respectable reasons. Crantock is owned by the National Trust, whose members ensure the beach is kept in great condition.

Grab your bucket and spade and build sandcastles, go for some snorkelling in the sea, or maybe you’d rather try your hand at some dune jumping? Located by the South West Coast Path, making it the perfect pitstop location whilst on your walk.

The beach has many amenities such as cafes, toilets and parking, and is also manned by a lifeguard throughout the main summer months.

Clinching the last spot on our ranking of best beaches is the famous Man O’War Beach in Dorset. Whilst many of the other beaches mentioned can be considered as under the radar locations, this beach is definitely the contrary.

Thousands of visitors flock to Man O’War every year for a slice of heaven. The combined sand and stone beach paired with crystal clear waters make this beach give the illusion of being on a Portuguese coast rather than southern England! The main attraction, however, is Durdle Door – the fascinating rock formation which juts out into the water. 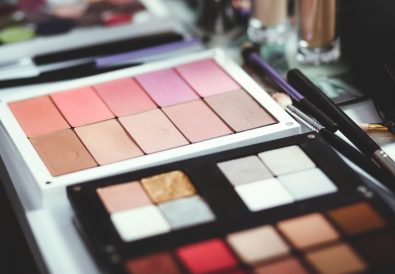 How to get the edge with a makeup artistry course 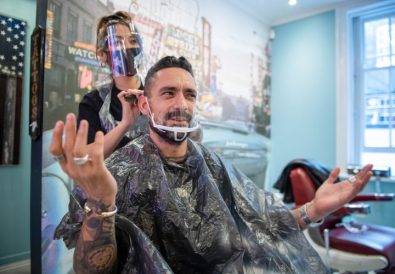